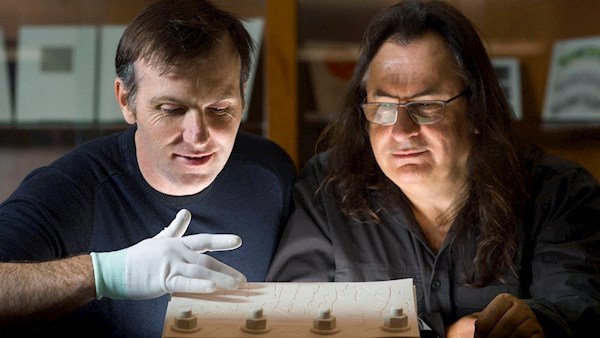 LIKE so many good things in life, it started as a happy accident. Dublin composer and visual artist Stano was working in his studio with harmonica player Brian Palm when Palm began to tell an anecdote. Stano asked if he could record the story and decided on a whim to play a track he had been working on with Dutch jazz guitarist Jeen Rabs as Palm told his tale.

He had hit on a magic formula, a key to unlocking spontaneity in his readers by playing them a specially composed piece of music while they told a story.

Growing into a project called In Between Silence, Stano has now recorded over 60 contributors telling stories, including leading lights in Irish art and literature like Anne Enright, Roddy Doyle and Robert Ballagh.

The resulting tales have an immediacy and an emotional edge, even when recorded by artists and writers who are usually used to delivering polished performances of their work.

“When poets come in, it knocks that recitation voice out of them,” Stano says. “I think they adjust to the music and they’re subconsciously moulding into the track.”

Yet the results are often as synchronous as Stano’s first experience with Brian Palm: “Aidan Gillen said he had a story about a rabbit that he wanted to tell, but when he came into the studio he told a story about an old man he met in New Orleans when he was shooting The Wire instead. But it still just worked.”

It’s a typically intuitive approach from John Stanley, AKA Stano, who has been recording and producing avant-garde and experimental music and film scores since his early New Wave studio albums in the 1980s, following his time as synth player with legendary Coolock punk band The Threat.

Apprenticed as a cabinet-maker in the early 1970s before his music career took off, the 58-year-old has also developed a visual art practice with numerous exhibitions. The In Between Silence process may sound simple, but it’s a project whose elements have been added to over its four-year duration: first, a method of exhibiting the recordings alongside a film by Stano’s wife, Denise Dunphy, was devised, originally for an early contributor to the project who had died.

Ballymun artist and youth worker John Duffy, with whom Stano had collaborated for a decade, recorded some unpublished poems with Stano in the days leading up to his tragic death from leukaemia at just 41, in 2014.

“He said he wished he’d recorded something and we did; he had all these stories about his wife and kids,” Stano says. “It was the most powerful and the most terrible day of recording I ever did.”

Later, for a memorial tribute for the artist organised by Dublin City Council, Dunphy produced a film that mostly left the audience sitting in the dark, listening to Duffy’s voice and Stano’s music, with an image displayed at the end of each recording.

“Sitting in the dark to listen to the stories has a tremendous emotional impact on people,” Dunphy says. “You could have heard a pin drop and when the lights came on, it was just extraordinary: there were people in tears. The darkness liberated them and allowed them to express their true feelings.”

Extending this process to the rest of the In Between Silence recordings, as a performance, the project had its launch at the International Literature Festival Dublin in 2016 and toured to New York later the same year.

Some of the contributors may be well-known in Irish public life, but many aren’t: Dunphy says that the stories from the ‘ordinary’ contributors have every bit as much resonance with audiences as the more famous contributors.

“The idea is to make an archive of our society,” she says. “We find people respond just as well if not better to the stories from the ordinary man on the street: everyone has a story to tell.”

A physical element was added. Ceramicist Kevin Pierce attends Stano’s recording sessions and prepares ceramic plates for each storyteller to inscribe when they are finished recording.

The resulting plates, plus an illustrated title page, have been bound together into the Porcelain Book, a 10-volume compendium of the contributions of Stano’s storytellers, and a work of art in its own right.

“I saw some of Kevin’s work and it was these slabs of porcelain with nuts and bolts,” Stano recalls. “I looked at them and said to Kevin, ‘These could be the pages of a book’.”

Pierce says the simultaneous strength and fragility of porcelain as a material is fitting.

“The book is fragile in a way, because it contains all these stories that are very personal,” he says. “It kind of makes it more real and more lifelike. The pages are a little warped and twisted; they’re not flat like tiles so you can see the spaces between them and it makes them more alive.”

Each contributor to the project inscribes four porcelain sheets, in case of breakages and because sometimes there are losses in the firing process.

“When the artist comes up to transcribe, they often have a vulnerable element to them because they’re working with an unfamiliar material,” Pierce says. “They can be quite big artists in their own right, and I think you capture a lot of personality, far more than you would if you just wrote out the words on a page.”

At UCC recently for the handing over of the The Porcelain Book were, from left, photographer John Minihan; project collaborators Denise Dunphy, Kevin Pierce, and Stano; and Crónán Ó Doibhlin, head of research collections at UCC Library.
The Porcelain Book has been formally handed over to UCC, where there are plans to display it alongside The Great Book of Ireland, the 1989 vellum book edited by poet Theo Dorgan.

Crónán Ó Doibhlín, UCC library’s head of research, collections and communications, says the Porcelain Book functions as a snapshot of Irish society in the early 21st century, and has a natural home alongside the Great Book of Ireland, in a future public gallery on the university campus.

“We’re almost reaching the end of the era of the book, perhaps, but we have these wonderful treasures that are going to persist into the future, and that’s part of our job as librarians is to ensure that this happens,” Ó Doibhlín says.

“With the In Between Silence project, we have the capacity to curate and preserve digital recordings into the future, so we hope to display the Porcelain Book so that you can listen to the audio as well.”